I was recently asked to describe the architectural inspiration that created the building at the bottom of my garden. My reply was straightforward: It’s a decorated shed. As the words formed in my mind, I was transported back in time to lectures at architecture school and a sudden sinking feeling that perhaps I had been too hasty in my reply. Is it a decorated shed, or is it a duck?

In their 1972 book Learning from Las Vegas, Venturi and Scott Brown expanded on the late 19 th Century maxim that form follows function. They proposed instead, that there are two types of buildings. A duck (named after an actual building in Long Island shaped like a duck) who’s practical form has been so distorted that the building is a pure symbol of what it does (the duck shaped building in question sells eggs) and a decorated shed that relies on the application of surface decoration and signage to express its true function (such as a vacant retail unit). My decorated shed it seems, is more that simply a shed, decorated.

I guess it’s difficult to establish, with any scholarly intent, whether the duck-shaped building is the optimum shape for the sale of eggs, but it exists and we should perhaps assume that it is at least good enough. At the same time, when architects create sheds for us to decorate – in our shops, our offices and perhaps even our homes, it would be inaccurate to suggest that these generic sheds are a pure expressions of function. On the contrary, these sheds are generally an expression of planning legislation and market forces, distilled into palatable lumps of space to be transformed by occupants into something else. The undecorated shed is nothing more than an exercise in mathematics, a compromise, re-packaged and sold as something intentional and considered.

The duck at least, is exactly what it says it is. Wrapped in fibreglass and paint, it is a shop for eggs, nothing more and nothing less. It is easy to be critical of the donut shaped donut shop or the basket shaped sandwich shop, as somehow dishonest or vulgar, but there is somehow less honesty in turning a grey blockwork box into a trendy burger bar or creative tech office. Architects and designers coat and skin the bare shed in an attempt to give it meaning and to give its users a sense of belonging. The decoration is a thinly veneered attempt to turn the shed into a duck. Handled carelessly or cynically the results are hollow and lack a deeper connection between space and people. Soulless spaces created for mass consumption, are a disappointing compromise of both form and function.

I prefer to side with Tschumi when he said that form follows fiction. He used the word fiction to describe how architecture should capture cultural artefacts and this has since been expanded to describe how architecture should be woven intricately with the stories, past, present and future of the people who occupy them. It is here where we can find a sense of meaning in the process of renovation. When asked why? we can speak very clearly of function and practicality, of technical solutions to complex problems, of constraints, neighbours and planning. But we can also speak of stories and memories, of things we have imagined or places we have been and these stories give richness and purpose to otherwise arbitrary or whimsical designs.

Does this have anything to do with actual domestic shed? Possibly. Garden sheds have changed. Originally a suburban attempt to hold on to a rural typology, the mini-barn or potting shed became over the years, a multi functional other space, where any number of activities might happen. As the scale of these buildings has also changed, a combination of cost and legislation has revolutionised the shed from a simple, pitched-roof, timber structure, to a now vast array of bulky boxes with flat roofs and metal-framed doors. Sheds have morphed from modest chapels into volumetric expressions of the parameters controlling them – height, cost, windows, etc. We then clad them in timber to make sure that they still look like a shed, at least what we remember a shed is. What remains is a diluted version of a shed, neither a congruent extension to the house, nor a pure expression of a rural retreat.

At the back of my garden, I have built a garden shed. Its design is controlled by three simple ideas. The volumetric shape is a proper shed. It is a child’s drawing of a house, a monopoly house, four walls and pitched roof. Set within a Victorian terrace, the form is contextual, but it is supersized, it feels both at ease and disruptive. It is tall, deep and siting, square on, at the end of the garden it frames the outside space both visually and functionally.

The timber cladding is definitely not house, it is clearly something distinct and not domestic. The oak boards are old and silvered, laid with dark gaps to create a stark geometric pattern. Without interruption the boards run over the whole form in ribbons. There are no gutters, the roof and the walls are treated identically and there is no superfluous detail, nothing to anchor the building visually to a scale or use. The boards reveal a large opening to the main space and conceal a door to the storage area. The contrast of the geometry and the texture feels at once hard and tactile, both controlled and random.

Everything else is functional but it doesn’t have a function. It is an office, a study, a gym, a conference space, a TV room, a playroom, a library, a bar or a shelter. The shape, the material palette, the arrangement is a simple distillation of non-specific function. A practical tiled floor that runs out to the terrace outside, an unfinished plywood wall to fix things to, a grey wall to project onto and some shelves. That’s it. The door is a glazed garage door, rolling up over the ceiling to leave a clear opening, there are no panels to clutter the reveal – inside is outside. This decorated shed is pure fiction, a collection of stolen ideas from things I have seen, the cladding from a barn in Austria, the door from a brewery in Oregon, the form so ingrained into our cultural language as house. And the space itself - a blank canvas, a space to be, to enjoy, to work and rest, alone, with family or friends. A space for fiction still to come, surely that’s all we really want from our sheds? Not a copy of a barn, not a copy of a house, but a true other space. Perhaps this is not a decorated shed after all, maybe it’s just a shed. 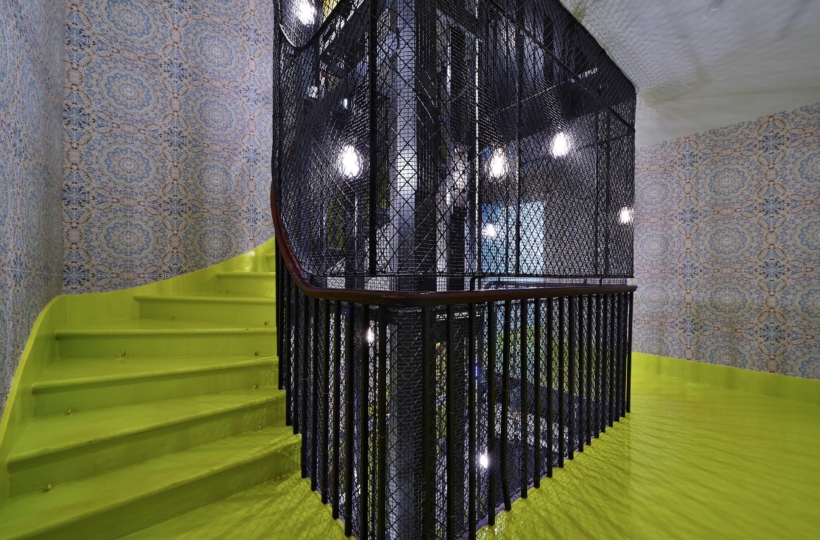